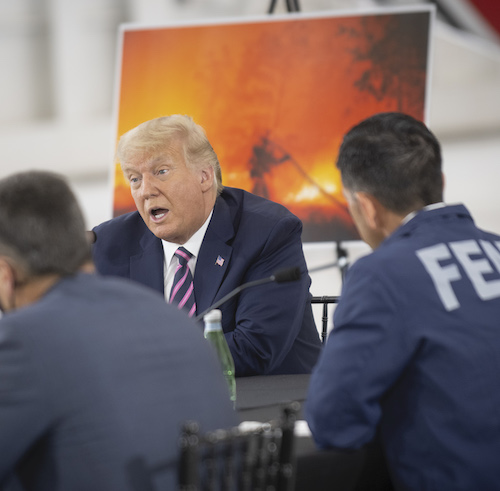 In a briefing on the barrage of wildfires burning in the West, President Donald Trump baselessly claimed “it’ll start getting cooler,” adding that he didn’t think “science knows” whether or not temperatures would increase in the future. Scientists are very confident that global average temperatures will continue to rise as the world continues to emit heat-trapping greenhouse gases.

The president’s comments came during a Sept. 14 briefing in McClellan Park, California, when Trump met with California Gov. Gavin Newsom and other state officials. The Golden State is battling more than two dozen wildfires, including the August Complex Fire in Northern California — the largest blaze in state history — while wildfires are also raging in Oregon and Washington.

In an exchange with Wade Crowfoot, California’s secretary for natural resources, Trump falsely suggested that the science of climate change was unsettled.

After noting the record-breaking temperatures in Death Valley and Los Angeles this summer, Crowfoot said that vegetation management was an area of “mutual agreement,” in terms of mitigating wildfires, but pushed Trump to acknowledge that addressing climate change is also important for forests.

“Because if we — if we ignore that science and sort of put our head in the sand and think it’s all about vegetation management, we’re not going to succeed together protecting Californians,” he said.

“I wish science agreed with you,” Crowfoot countered.

Trump’s claims are groundless. “The science is crystal clear, and has been for decades,” University of California, Los Angeles climate scientist Daniel Swain told us in an email.

“[T]he Earth is warming due to the increased atmospheric concentration of greenhouse gases resulting from human activities, and will continue to warm for as long as we continue to emit those greenhouse gases in large quantities,” he said. “For this reason, there is virtual unanimity among climate scientists that the Earth will continue warming, and will not start getting cooler, for the foreseeable future.”

The sentiment was also shared by climate scientist Katharine Hayhoe, a co-author of the Fourth National Climate Assessment and co-director of the Climate Center at Texas Tech University.

“It will NOT start getting cooler, because carbon emissions from human activities continue to increase,” she said on Twitter. “How sure are we? Very.”

As he did in 2019 and 2018, Trump also suggested that the main, if not only, issue plaguing California was a lack of forest management.

“You can knock this down to nothing,” he said. “You know, you go to Europe and different places in Europe — countries where they’re forest countries — and they’re very, very strong on management and they don’t have a problem. They really don’t have with, as they say, more explosive trees than we have in California.”

Trump repeated the notion in an interview the next day on “Fox & Friends.” “You have forests all over the world. You don’t have fires like you do in California,” he said. “In Europe, they have forest cities. You look at countries, Austria, you look at so many countries, they live in the forest, they consider forest cities so many of them, and they don’t have fires like this, and they have more explosive trees. They have trees that will catch easier, but they maintain their fire.”

But as we’ve noted before, Trump’s comparison to forested Europe is misleading, as the climate there is in many cases colder and wetter. Austria, for instance, has an alpine climate that bears little resemblance to California’s.

A 2011 paper in the Austrian Journal of Forest Science noted that Austria “is a Central European country largely dominated by the Alps with a forest cover primarily dominated by coniferous tree species” and that the forests “do not fulfil the characteristics of fire prone ecosystems.”

And in fact, wildfire is a concern in many parts of the world, including Australia, Europe and parts of Africa and Central Asia.

Swain said that forest management is an important issue for some of the current blazes, given the practice of “total fire suppression” in the 20th century that prevented the naturally occurring lower intensity fires that scientists now know help prevent the larger, more damaging blazes.

“In densely forested regions of the American West, including much of interior California, these historical policies have indeed increased wildfire risk beyond what it would have been otherwise,” Swain said.

But, he added, that legacy of poor forest management is only relevant to forested areas — and many of California’s most destructive wildfires aren’t true forest fires. “Right now, the fires are a mix of true forest fires and wildfires burning in other vegetation types,” he noted, such as brush, grass and woodlands.

And forest management for those select regions is still only part of the story. Climate change, Swain said, “is acting as a pervasive force across the landscape and is increasing the severity of wildfire across a wide range of vegetation types–meaning that climate change is an important factor in understanding the severity of *all* of the fires currently burning.”

The main mechanism for that, he explained, is that hotter temperatures suck more moisture out of the vegetation, leaving it drier and more susceptible to burning. The resulting fires are therefore more prone to extreme fire behavior and are often faster-spreading and hotter-burning fires that are more dangerous to people and more harmful to the environment.

In a paper published earlier this year, Swain and his colleagues found that climate change has already more than doubled the risk of extreme fire conditions in California during the fall season since the early 1980s.

“Climate model simulations further suggest that continued warming and strengthening of seasonal drying trends in the future will likely result in further increases in extreme autumn fire weather conditions throughout California—even for a future climate scenario similar to that which would result from adherence to commitments made in the UN Paris Agreement,” the scientists concluded. “Collectively, this analysis offers strong evidence for a human fingerprint on the observed increase in meteorological preconditions necessary for extreme wildfires in California.”

Hayhoe also debunked the idea that a lack of forest management is the only reason why wildfires are burning more land. Research has shown that the cumulative area burned by large wildfires in the West has grown significantly in the past few decades, and is approximately twice what it would have been in the absence of climate change.

“Forest management absolutely plays a role,” she said in a tweet, but climate change “is making it a lot worse.”