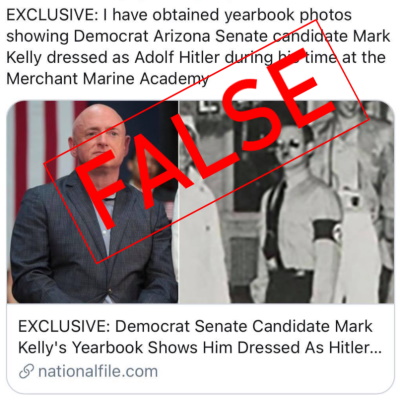 Social media posts, including one retweeted by Donald Trump Jr., falsely claim that a yearbook photo shows Democratic Senate candidate Mark Kelly dressed as Hitler for Halloween. Kelly’s campaign and several of his former classmates told FactCheck.org that the photo is not of Kelly.

Drawing on a report from a conservative news site, several social media posts claim — without evidence — that Mark Kelly, a Democrat running for a U.S. Senate seat in Arizona, was photographed in an Adolf Hitler costume at a 1985 Halloween party at the U.S. Merchant Marine Academy.

“Breaking: Yearbook Photo emerges of AZ (D) Senate candidate Mark Kelly dressed as Adolf Hitler!” reads one Facebook post that racked up more than 2,600 shares in less than a day.

Another post, by the group “President Trump Fans,” includes images of a tweet by the reporter who originated the story on Oct 23.

The president’s son, Donald Trump Jr., also retweeted the story the day it was published in National File, a conservative web outlet founded in 2019 that has previously trafficked in misinformation, as we’ve reported.

The allegation about Kelly is baseless.

There is no identifying information linking Kelly to the photo, and numerous classmates told FactCheck.org that it wasn’t him. Representatives for Kelly, who is perhaps best known as a former NASA astronaut and husband to former U.S. Rep. Gabby Giffords, also denied that he is in the photo.

“The website that published this has been unable to provide any evidence or verification of their original claim — and that’s because it is not true,” said Kelly’s communications director Jacob Peters in an email.

National File states in its report that it “has obtained yearbook photos that show Mark Kelly dressed as Hitler for Halloween,” but provides no evidence to support that claim. The photos in question are black and white and show a young white man in aviator sunglasses with a mustache and a swastika armband.

The article does not include any sources who say the person in the Hitler costume is Kelly. One piece of circumstantial evidence, the story suggests, is that Kelly is photographed wearing similar sunglasses on his yearbook’s senior page.

We found the photos National File purportedly unearthed online in a publicly available scanned copy of the 1986 yearbook. Photos of a costumed Hitler appear on two pages, neither of which are captioned to provide identifying information.

Shortly after publication of the allegation, the Kelly campaign issued a statement saying that Kelly was not in the Hitler photos and “he never dressed up in such a costume.”

“The story is false and should be retracted immediately, and those who have spread this misinformation online should delete it,” said campaign manager Jen Cox. “Anyone using it to try to smear a combat veteran should be ashamed of themselves.”

The campaign also relayed statements from five classmates who said the person dressed as Hitler was not Kelly. The Arizona Republic also wrote a story detailing Kelly’s denial and that of four classmates.

National File then published a second story claiming that Kelly’s classmates went “dark” after their Friday statements, suggesting that those statements might have been fabricated by the campaign, since it was unclear if the Arizona Republic reporter had spoken directly with those individuals.

FactCheck.org can confirm that Kelly’s classmates did not go “dark,” as we subsequently spoke by phone to two classmates who gave statements to the campaign.

Ed McDonald verified that he was a classmate of Kelly’s, had attended the Halloween mixer, and that Kelly was not dressed as a Nazi. He added that the people in the photo were from Second Company — a different company from Kelly’s.

McDonald said he first heard about the allegation from fellow classmate Jennifer Boykin, and that when he went to consult his yearbook, he “immediately” knew that the costumed Hitler was not Kelly.

Peter Lindsey, another classmate who provided a statement to the campaign, also confirmed similar details in a phone call with FactCheck.org, saying that he and his classmates were in “incredulous shock that this even came up.”

Noting that he is a Republican and that he contacted the Kelly campaign — not the other way around — Lindsey said Kelly was not in the Halloween photos, and that since Kelly was as a regimental officer who was in charge of the plebes, or freshmen, the concept that Kelly would dress as Hitler was preposterous.

It’s “inconceivable” that someone in Kelly’s position would have worn a Nazi costume two months into the school year, he said, noting that Kelly “wasn’t the kind of guy to do that” anyway.

Lindsey further said that he had been contacted by someone on LinkedIn about six weeks ago who asked him if Kelly was in a particular photo. The photo was similar to one of the Halloween photos in the yearbook, but did not obviously show that the person was dressed as Hitler and did not show a swastika.

In screenshots of the exchange that were shared with FactCheck.org, Lindsey replied that the photo was grainy, but that the person did not look like Kelly — and that the other people he recognized in the photo were from a different “battalion / company,” so he “highly doubt[ed]” that it was Kelly.

The LinkedIn request came from Karim Addetia, who claimed to be a research and communications intern at the Center for Responsible Enterprise and Trade.

The Kelly campaign has identified Addetia as a consultant with the Senate Leadership Fund, a super political action committee dedicated to expanding the Republican Senate majority. According to Federal Election Commission filings, the super PAC has paid Addetia nearly $29,000 this year and the group has spent more than $31 million in an effort to defeat Kelly in his race against Republican Sen. Martha McSally.

“It is absolutely not Mark Kelly,” said Geoff Pletcher.

“I was at the Halloween party in 1985, in fact – I am one of the ‘jail birds’ in the bottom left photo,” said Connie Dato English. “The person in question in the middle photo is not Mark Kelly, nor a public figure. I can say unequivocally that Mark Kelly is not pictured on that page at all.”

Joe Martino, the 1986 class president, also said in a phone call that the Hitler figure was not Kelly. He added that he had heard from at least five other classmates who said the same.

Martino, too, noted that the people he recognized in the photo were from Second Company — and said that given that Kelly was second in command of his regiment, it was hard to imagine him even attending the party.

“For him to even be at this party, in costume of any kind,” he said, is “hard to figure.”

Peters, Jacob (@JacobNPeters1). “Those photos are not of Mark Kelly. See statements from our campaign manager and one of Mark’s classmates who attended this event #AZSEN.” Twitter. 23 Oct 2020.